Our Instructors – Your safety is our primary concern! 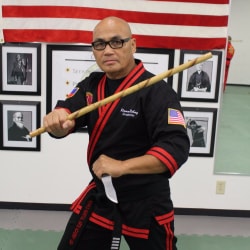 Grandmaster Ramon R. Ribay (pronounced Ree-bay) is a highly experienced martial artist with over 50 years of training across multiple styles including Shotokan Karate, Arnis/Eskrima/Kali, and Aikido. He is one of a few native Filipino Grandmasters of his generation actively teaching in the Midwest. He began his study of the martial arts at age 12 in the Bikol Region of the Philippines.

In the 1970s, Grandmaster Ribay competed successfully on four continents in national and international tournaments, including the International Karate Championships in Long Beach, CA. As a non-commissioned officer in the National Intelligence and Security Authority, he was a tactical combat instructor for the Philippine Airforce and the Philippine National Police Academy.

In 2019, Grandmaster Ribay was inducted in to the Hall of Fame as Martial Artist of the Year.

Master Phil is a life-long practitioner of the martial arts.  His initial interest was sparked by Sunday afternoon television broadcasts of old Kung Fu movies.  At age 7 in his hometown of Las Vegas, NV, he joined a “Korean Karate” park district class, taught by Shotokan and Taekwondo Master, J.J. Reis, Jr., a retired U.S. Naval Commander who served in the Vietnam and Korean Wars.

Master Phil earned his 1st Degree Black Belt during his senior year in high school and continued his martial arts training in college, serving as secretary and assistant instructor for the Stanford University Taekwondo Club.  Always interested in broadening his martial arts experience, Master Phil also participated in the Stanford University Aikido program.  Upon graduating with a BS in Electrical Engineering, Master Phil headed to Denver, CO, where he joined Strantz Taekwondo, which was known for its success in Olympic-style competition.  From Denver, Master Phil moved to the Fox Valley area, where he earned his MBA from DePaul University.  Master Phil established a martial arts program at a local gym in St. Charles and co-founded BAM! Self Defense, a group which taught basic self-defense at the St. Charles Park District.

A Hall of Fame Inductee, Master Phil has coached and officiated at local, state, national, and international competitions, and served as Vice Chairman and Vice President of various state associations and committees.

He continues to train in Shotokan Karate and Filipino Martial Arts under the direction of Grandmaster Ribay. 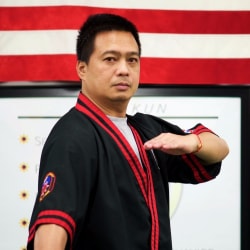 Master Rodolfo T. Poblacion, Jr. comes from a martial arts family.  His uncle, Grandmaster Romeo Tabano, founded the Martial Arts Training Center of the Philippines (MATCOP) in 1975.  Many world-renowned martial artists of all styles visited MATCOP back in the day including Hirozaku Kanazawa, and Antonio Ilustrisimo.  It was at MATCOP in the early 1980s that Master Rodolfo studied Shotokan Karate under our very own Grandmaster Ribay.

Master Rodolfo’s martial arts resume is extensive and includes induction into the 2012 Philippine Martial Arts Hall of Fame, where he was named one of the Top Ten Filipino Martial Artists.  He has competed, coached, and officiated Karate and Arnis tournaments for many years.  His expertise in Modern Arnis has brought him all over the Philippines, as well as Hong Kong and the United States to conduct seminars.  As an officer of IMAFP, he has been instrumental in organizing several of the FMA (Filipino Martial Arts) World Festivals that have taken place in the Philippines.

For his contributions in spreading Filipino Martial Arts and culture in the short time he has been in the Chicagoland area, Master Rodolfo was inducted into the Chicago Filipino Asian American Hall of Fame in 2016.  In the prior year, he was named World Martial Arts Academy’s Most Valuable Person. 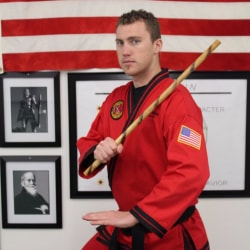 Instructor Jake has studied multiple martial arts including Mixed Martial Arts, Shotokan Karate, Modern Arnis, Taekwondo, and Aikido for over 20 years. He received his 1st Degree Black Belt at age 9. A former and once-again student and long-time friend of Master Phil, Instructor Jake has competed successfully in local, state, national, and international competitions. Under Master Phil’s coaching, Instructor Jake was a 3-time Illinois State Champion, and a medalist at the Junior Olympics and the North American Open.

Instructor Jake entered the American Line Builders Apprenticeship Training program at age 20.  He credits much of his success in the lineman field to the confidence, discipline, and focus he developed in his martial arts training.  He became a Journeyman at age 23 and a Foreman at age 25 for ComEd’s contractor of choice.  He has been on the front lines of recovery efforts for hurricanes including Gustav, Ike, Irene, and Sandy, and Irma.

This message is only visible to admins:
Unable to display Facebook posts

Enter your information below to learn more about our current web specials for kids.

Enter your information below to learn more about our current web specials for kids.

Enter your information below to learn more about our current web specials for adults.

Enter your information below to learn more about our current web specials for families.